Hey all!  I finally picked up a win at USAT Long Course Duathlon Nationals in Enumclaw, hosted by BUDU Racing.  More than just a race, it was the first real test after several months of difficult base training.

I’ve done this course several times before, and even though its been over a decade, I was reminded of the past and didn’t want to make the same mistake twice.  I used to race the Mud Mountain loop as a teenager when I was road racing, and I also raced the Mount Rainer Duathlon when I was 17.  At times the weather has been unforgiving.  I remember as a 14 year old, I was doing the road race as part of the Mutual of Enumclaw Stage Race and had to drop out due to hypothermia.  There is one big (600 foot) climb on the 14.4 mile road loop; my dad was cheering for me about half way through the climb and I remember I just pulled off and got into the van, so cold I could hardly speak.  Another time I placed 3rd on the G.C. (in the Cat 3 division) as a 16 year-old after climbing well on Mud Mountain, and that was a big result for me.

Clothing choice was going to be important and this time I got it right, but just barely.  It was warmer and partly cloudy down at the race start and where the runs occured, but cold and rainy on top of the mountain.    This time the course would be a 5.8 mile run down in the valley, two of the 14.4 mile loops for the ride, and a final 3.8 mile run for the long course competitors.  Several athletes had to stop, put on rain jackets, or had to slow down and lost time due to the conditions rain and cold on the bike course.  For me, a long sleeve base layer and liner gloves seemed to do the trick, and all I  had to do was focus on my effort.  The optics were exceptional in my Rudy Project Rydon sunglasses even with the rain; big improvement over my last pair.

Rusty Pruden and several other athletes had me against the ropes during the first run, and I didn’t catch the leaders until 20 or so minutes into the first run.  I had a small lead going into the first transition and never relinquished 1st position.  This was my first race using a power meter, so I just “set it and forget it” at about 300 watts, which was really nice considering the windy, rainy, and hilly nature of the course.  Getting off the bike and into T2, I realized my feet were totally frozen!  I was wearing a really light (4oz) and low profile flat courtesy of Run 26, which combined with the frozen feet, made my calves feel like they were going to split in two!  I let off on the last run a little bit, but still felt good about the effort.

Are you interested in stats?  I am these days as I am gathering data from these early season races.

1st run – My heart rate averaged 172 for the first run (28:15); I estimate this is about my lactate threshold right now, and equated to about a 5:15 mile pace (this depends on who you trust – my footpod was off and on the fast side while the mile markers were long and on the slow side, so I am splitting the difference).  Mile Splits were very even throughout the first run. 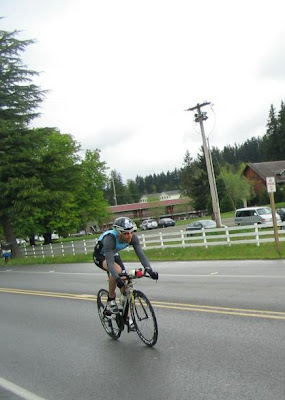 Nutrition – I consumed 400 calories including 1 serving of Generation UCAN (110 calories), 3 energy gels (100 calories each) and 40 oz. of water on the bike.  This is pretty close to the gold standard of 65 grams of carbohydrate per hour of exercise (which would have been 520 calories for a 2 hour race).  I am actually surprised I consumed this much.  My carb intake while exercising has gone way down due to a combination of aerobic training and the UCAN superstarch, which helps you burn fat while training/racing by keeping insulin levels stable.  At Las Vegas just 2 weeks ago I consumed only 300 calories for a 2hr 50 minute race!

2nd Run  – Started at 160 BPM and gradually built to 170 bpm by the end.  Didn’t capture pace data as I switched to a different shoe. 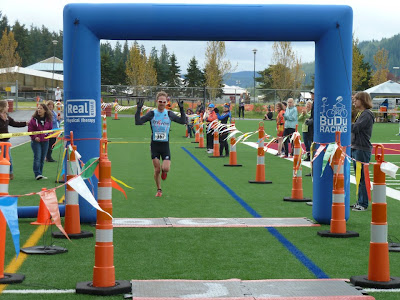 back to news
← previous postDid Jesus rise from death? next post →Training and Nutrition Post from Generation UCAN