Hi there! A lot of good things have happened recently in the triathlon realm of my life recently. The happiest of which was signing with the Team Trakkers/Rev 3 Triathlon Team. This is a big step for me and one I think will really help my triathlon career continue to progress.. The team is comprised of some really solid pro triathletes including Michael Lovato, Brian Fleischmann, and Richie Cunningham. We have some awesome sponsors lined up including Trakkers GPS, Rev 3 Triathlon, Avia Shoes, First Endurance Nutrition, TYR Swimwear, Kestrel Bicycles, and Canari. Check out http://www.trakkersgps.com/ when you get a chance and you can get more of the “scoop” on the team and the Trakkers technology. I am really excited to work with these fine individuals and companies, use their products, race fast for them and represent them well. 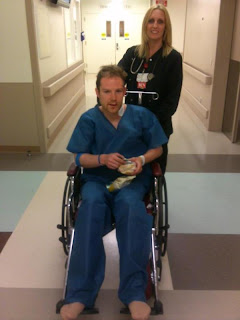 Okay, onto the bad news. So, last Friday I was in Tucson for the Duathlon Nationals Championships, and was excited to be in good shape and ready to defend my title. I was literally two-blocks away from finishing my pre-course ride the day before the race, was about to go through a T-intersection, and that’s about the last thing I remember. I woke up on a stretcher, took a helicopter ride, and ended up in the Emergency Room with a fractured pelvis, pneumothorax (air that gets outside the lung but still inside the body, where it is not supposed to be), and a concussion.

Apparently a car was traveling in the opposite direction as me, did not see me, and going through the intersection, made a left turn into my line of travel. We were both traveling at low speed (~15mph), but it was enough to knock me unconscious, as from what I can ascertain, I went headfirst into the passenger side of the car. I was unconscious for a couple minutes, and when I came to, apparently said some things to my dad (who was on the scene quickly) that I have no recollection of!

I have a long road of recovery ahead of me. Your prayers are more than appreciated, and I would like to thank all of you that been praying for me. I am making a very speedy recovery, which I know is what most of you have been praying for!

USAT did publish a pre-race article, in which I was a contributor. It can be viewed here: http://www.usatriathlon.org/news/2011/04/29/elites-value-duathlon-community-give-advice/42074?ngb_id=12

Another pre-race article gave me a little press: http://www.usatriathlon.org/news/2011/04/26/stellar-field-headed-to-usa-triathlons-duathlon-nationals/42013

Other than that, I would like to give a shout out to my friend Matt Russell, who won the national championship in my stead!