The USAT Winter Triathlon Nationals is a not-too-often compilation of three sports: running, mountain-biking (in the snow no less), and cross-country skate skiing.  You would be lucky to find one of these events in your state per year.  I tried my luck in the 2009 Nationals event in Bend, OR, and got rocked by various mountain-biking and cross-country skiing superstars, so I figured, “Hey, why not relive the pain all over again?!”
The venue was Homestake Lodge, a beautiful cross-country resort just outside of Butte, MT.  It was a long drive from Seattle– about 10 hrs.  My dad played race manager and I insisted we take his Ford Explorer (now dubbed “The Exploder” because of its various mechanical problems).  On the way, the alternator gave up the ghost.  Just regular maintenance this time but still suck-worthy to break down on your way to a race.  We were very fortunate though, rolling right into Ritzville, WA(the only town for miles) and straight into the NAPAautoparts store right before the battery was totally drained.  They had the alternator in stock, and a mechanic 3 blocks down had it installed for us in just about an hour.  There certainly could not have been a better place to break down!  You may call it coincidence; I call it God’s Providence (providence is how God executes His sovereign plan through the ordinary affairs of humans and nature).  Anyhow, we were back on the road in no time!
Fast forward to the race.  It had snowed the night before, which made the snow much softer and looser than in my trial runs the day before.  My run went well; I let others go out too hard and gradually reeled them back in as is my usual tactic.  I tried to get my feet off the ground as quickly as possible so as not to sink into the snow too much, which was pretty efficient.  I gradually bit into Chris Ganter’s lead, and caught him as we entered T1.  Chris and I headed out onto the bike and were talking to each other that we should try to hold off the uber-mountain-bikers for as long as possible.  It was quite loose and slippery on the new snow, and Chris and I had to get off and run on many of the uphill sections, sections that I easily rode the day before.  Mountain-Biking phenom Landon Beckner was somehow getting traction and breezed by us easily.  I fared the worst and lost about 2 minute to Landon and 1 minute to Chris over the entire bike course.  It’s very difficult to ride in the snow, you know.  Definitely lots of controlled drifting in the corners. 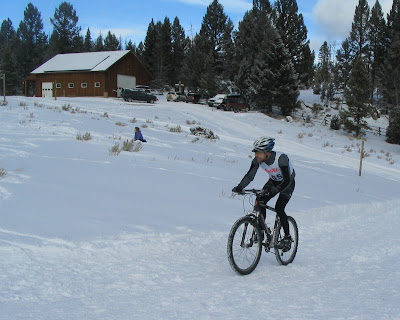 You head up a couple switchbacks going into T2, and I looked back to see if anyone was coming up behind me.  I thought I was in the clear, but took one last glance and caught Adam Wirth in the corner of my eye, maybe 45 sec-1min back.  Knowing that Adam is no slouch on skate skis, I new I had my work cut out for me to maintain 3rd place. 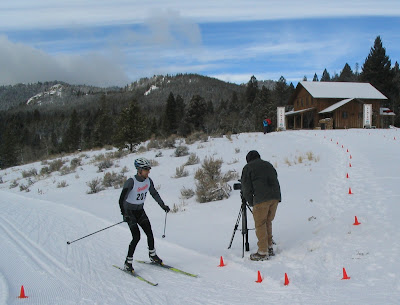 Somehow I caught Ganter in transition and ripped by him and into second place as the ski began.  I stayed in the pain cave the entire time, knowing Chris, Adam, and a slew of other good athletes (such as Matt Seeley) would be right behind me.  The 6000 feet of elevation made the skiing extremely tough, especially on a hilly, twisty, and sometimes technical course.  Somehow I held off Adam and the rest of the lot, finishing in 1:07:38.  Landon put another 3 min into me for the win!  Ouch. 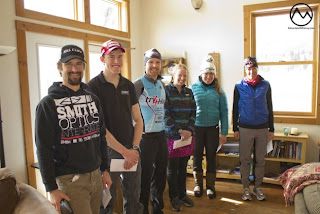