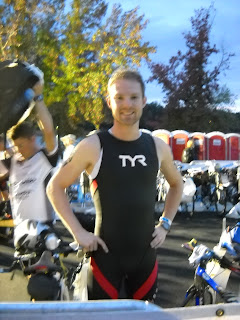 I surprised myself out there Sunday at Rev3 South Carolina, a long trip from Seattle but well worth it for the amazing race experience that Rev3 provides. The race was stacked with some 45 or so male pros, all of which I knew would be excellently prepared. A $50,000 prize purse tends to attract good competition; who would have thought!

Coming off a pelvis fracture in late April, Rev 3 South Carolina would be my first important race back. I competed at the Black Diamond Olympic Triathlon a couple weeks ago and won by a good ten minutes, but that was just a small local event. This race would be against some of the world’s best triathletes.

I have received some amazing assistance from Sports Reaction Center (SRC), a physical therapy clinic, and Elite Sports and Spine, a chiropractic/Active Release Therapy clinic, during my comeback to competitive triathlon. I’ve also been using the Alter G anti-gravity treadmill at SRC during my build-up, which is new technology that is a huge advantage to anyone that has to learn how to walk and run again. Special Thanks goes out to Jacob Perkins at Elite and Neil Chasan at SRC. Your support is amazing!

Okay, now before we get into the details about the race, let’s get past the nasty little issue every endurance athlete has: excuses – I woke up to a nasty cold race morning…I couldn’t get comfortable on the bike…I didn’t fuel well enough early on…I’m just coming off a big injury…okay, now that that unpleasantness is behind us, let’s move onto the positive.

SWIM: The swim was by far my best 2000m swim ever. No questions about that. Thirty minutes sixteen seconds. I’ve done close to that in the past, but that was while wearing a wetsuit, which usually shaves off 2-3 minutes. Starting off was a little frantic as usual, and I tried in vain to get on some feet after getting around the first buoy. No luck- I just missed getting on a good train! The first woman passed me half way through (the women start 3 minutes after the men). I couldn’t get on her feet either; she was just too quick. Second women’s pack went by…still too fast for me to hop on. Eventually the 3rd women’s pack rolled by and I hung on for a good minute or so. I think there was something pushing me the entire time and that helped keep my tempo up. Controlled but not letting my arm-turnover lag. This helped me to a fast time (for me) even though I didn’t draft virtually the entire swim.

BIKE: The bike was my fastest half-iron distance bike, 2:22, but maybe not my best. I was getting good feedback right away, catching all the pro women early on and a few guys. It might surprise you, but that’s actually very positive for me. Even though I have had some good placings in the past, sometimes I don’t catch the top woman until the beginning of the run!

Unfortunately, my hamstrings were on fire right away, and I couldn’t seem to get my powerful quads into the mix. Eventually my muscular endurance waned. I was on the hoods often or out of the saddle on many of the small climbs, and was generally could not get into a good rhythm. Fortunately, I’ve spent a lot of time thinking about how to get more aero, and even though I wasn’t putting down great power numbers, I was still pretty fast compared to my previous self simply because of more aerodynamic equipment and body position..

The bike course ended up being WAY harder than I expected with all the small grinding climbs. The course is held mainly on quaint backroads with virtually no traffic. It’s kind of like 70.3 Lake Stevens only with less opportunity to get into a rhythm because of the various turns and shorter but more frequent climbs. The wind was much worse than expected out there on race morning too. I have no clue how Starky went 2:10 on that course, but props to him! I felt like I lost a lot of time on the 2nd half of the course, and started running out of gas way too early. I had one flask of First Endurance EFS Shot with me, which provides about 400 calories, and was expecting some gels at the aid stations. Unfortunately I didn’t see any until mile 2 of the run! 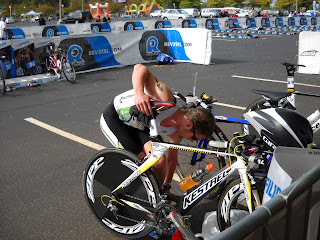 THE RUN: I was actually pretty pleased with my 1:18. I couldn’t pull out my ace-card simply because of lack of consistent run training. I’ve had some residual back pain which has caused me to be very conservative in my build up to real running training again, so I knew racing 13.1 miles would be a stretch, and thought anything under 1:20 would be good at this point. After throwing back as many gels as I could find in the first half of the race, I started to feel almost normal again. I passed a few athletes on the run, but not enough to move me far up the leaderboard. Still, I went about 1:30 faster than my best Half-Iron distance race for overall time, and I think there is even more potential to discover.