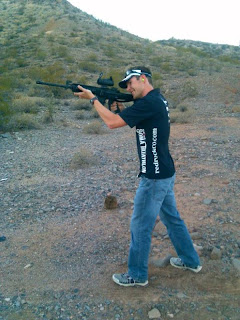 Matt had a good placing in his sights, but couldn’t deliver the goods
(he did get to shoot an AR-15 after the race, however)
Last weekend was the Soma Triathlon hosted by Red Rock Co.; it has been a popular local race for Arzionans…Arizonians…Arizonites (there we go), in the past. Durapulse Performance Co. and Iron Gear Sports put up a nice little prize purse for the professionals this year, so I figured I might as well give it a shot. If nothing else it would be a good learning experience to see how well I can do two half-ironmans with only 2 weeks between. Having gotten into shape for Rev3 South Carolina, I figured I might as well give it a crack as the end of the season was approaching, and there wouldn’t be many other opportunities to test my fitness.

There was one big surprise on my trip to Phoenix. My 5:45 flight was delayed until 6:10 (according to the check-in counter, arrival/departure screens, everything), so I took my sweet time at Sea-Tac and downed a burrito prior to the flight. I showed up at the gate at 5:43 and to my dismay, the flight had left already! Why delay a flight and then un-delay it? I didn’t even know you could do that! Anyway, Southwest partially redeemed themselves by getting me to Phoenix only 2 hours later than my reservation. A good lesson that the battle of getting to your flight is not won until you arrive at your gate.

Fortunately I was staying with the coolest homestay couple ever, Denise and Dave Jones, and they didn’t mind picking me up late. I met this classy couple the last time I raced in Phoenix for the Desert Classic Duathlon, and since then they have gotten married, gotten pregnant, and moved to the suburbs! My how things change.

The swim was held in Tempe Town lake, this strange man-made lake in the middle of the city. The pro field was much different than usual in that most of the field was not a super strong swimmer, and most were good runners. Also, men and women started at the same time, so I knew I would have people to swim with. I found myself a nice pack and steadied into rhythm. The pace felt pretty comfortable, so I suspected maybe I should have been up one-pack. Usually I am just fighting by myself in order to not lose too much time, so it was strange to have options! I got out of the water at about 31:15, so sure enough I was a bit slower than last race, but no matter, plenty of time to reel people in, or so I thought.

I decided to start the bike out conservative this time in order to get the legs warmed up before really putting the smack down. Jozef Major and Kevin Taddonio passed me early on, but I let them go as I was more interested in attempting to grab a gel at the first aid station and somehow they escaped my grasp. I just kept riding consistent and thought things were going pretty well, hitting 27-28 mph on the flats. I was passed by another rider and decided that I should ramp things up and try to stay with him. Unfortunately, this was the exact wrong move at the exact wrong time! I picked up the pace a bit too much, ended up losing all composure, and immediately hit a nasty head-wind section. I floundered for the next 5-6 miles, and struggled to find a normal rhythm. Finally, I came out of my tail spin, but not before my average speed had plummeted by ½ mile/hour. Still, I finished in a PR bike split time of 2:17 thanks to a fast course. The mistake of attempting to ride at a higher intensity probably cost me a top-5 in the end, but hindsight is 20/20 and I have used other riders to pace off of and follow their lines thru corners and it has worked in the past. It just didn’t work this time.

Coming into the transition around 2:50, I was about 3 minutes up on my time thru T-2 from two weeks ago. Sweet, I thought to myself, unless you really blow it on the run, you are headed for another PR. Aside from stopping to drain an unusually full bladder at mile 1, the first lap (6.5 miles) went off without a hitch, I kept hitting 5:45-5:50 mile splits and was surprised at how easy it felt. Then, the thermostat hit 90 plus and in the matter of about a mile I went from feeling great to barely moving. My weak Seattle-trained body couldn’t handle the heat! I hit an aid station and decided to walk thru. I dumped as much water as I could and grabbed ice to put in my hands. I repeated this a couple times. By the time I hit the aid station at the eleven mile mark I had sufficiently cooled myself down. The refreshment that cooling the body down has an almost immediate effect, and one can start running quickly again. The heat has another weird effect in that I nearly forgot I was racing, but once I cooled myself off I looked at my watch and realized that I still had a chance to PR. “Oh crap Matt, start sprinting!” I thought. So I hit the gas full throttle, must have hit 5:30 for the last mile. I just missed my PR by around 30 seconds. Looking back at the results, other guys must have been having the same issue, because I still posted the 3rd fastest run time even with 3 stops.

Circumstances worked out nearly perfectly this race. I had an ample warm-up, the course suited me, my Kestrel was fast and fit well, I had plenty of First Endurance EFS liquid shot and gels on course along the way, and the Avia-Bolt shoes felt amazing as usual. Probably the main thing is that I don’t have the base built back up sufficiently to compete at this level, especially in the running department. Still, I could have executed the race better tactically. I also found it pretty difficuly to concentrate and push myself quite as hard as last time, and have a new respect for the pros out there that can put in good performances week in and week out.

back to news
← previous postA Long Ways to Go – Rev 3 South Carolina next post →See you at the Pig, Meet you at the Pear