How will Sheeks fair in Phoenix? 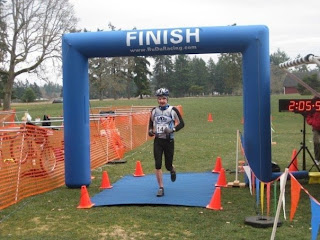 After his victory at the 2009 Duathlon Championships, even while being an underrated, underoutfitted underdog, Matt Sheeks will be racing his first race as a professional duathlete on February 28th in Phoenix, Arizona. The race will be the Desert Classic Duathlon, the race Matt used to qualify for the World Championships last year.
In the interim, Matt also won the “Who’s the Hardest” Off Road Duathlon in Tacoma, Washington in December, beating such notable athletes as Rusty Pruden (a top finisher at amateur short course triathlon nationals) and professional triathlete Mike Gordon. Sheeks showed his technical skills- riding a strong mountain bike portion and maintaining his lead after a stellar run (see pic on webpage).
But how long will the duathlon winning streak last? That is the big question posed to Matt Sheeks.
A less than optimistic Sheeks replied, “Ummm, I am probably going to get smoked in Phoenix. The best of the best in Duathlon will be there, and I am still riding my old leader TT bike with 1999 Dura-ace components. I am really looking to be on a faster bike by Spring, which will help my odds against the gear mashers.”

Sheeks continued, “Then again, training has been going really well, and I have been getting in about five swims, four runs, and four rides per week. I can feel the power coming back to the legs on the bike, and am getting back to the point where I can rub sub 6:00 per mile pace pretty comfortably on runs. “

Sheeks recently joined Team VO2 multisport (www.vo2multisport.com), and is being coached by Ben Bigglestone, who plans to bring Sheeks’ swimming to the next level, as well as add some sort of structure to Sheeks training. This should be a definite improvement since the only thing consistent about Sheeks’ training up until this point amounted to:

1 cup of coffee every morning,
2 workouts a day, and
1 mountainous bowl of ice cream after dinner

Sheeks has also picked up a couple sponsors recently, including Gu Nutrition and TYR swimwear. He apparently consumes 1000 calories a day just in Gu Chomps, accoding to training partners.
Sheeks has been known to compete well even while being an underrated, underoutfitted, underdog, so we will be expecting a surprisingly high finish in Phoenix anyway.