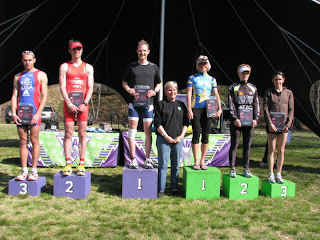 Sheeks “takes the Dub” at Elite Duathlon Nationals
Why anyone would want to leave Birmingham, I cannot imagine. What they say about Southern Hospitality is true, and it even spilled over to my little world of multisport racing a few weekends ago for the Powerman Duathlon in Birmingham, Alabama.
The Powerman Duathlon is a long-standing event in Birmingham, and this year it served as the professional duathlon national championship, as well as the qualifier for the Duathlon World Championships in Edinburgh in September. Coming off my third place finish at the Desert Classic Duathlon in Phoenix about a month ago, I was a bit worried about my odds coming into Powerman. The top 4 from the race would advance to the World Championships, and I really wanted to go. Surely, the competition would be stiffer at this race with so much at stake (a national championship, a world championship qualifier, and better prize money).
The kindness of the southerners even threw me off a little bit. Not being any stranger to grace*, I wondered how much I should take advantage of their hospitality. The first thing I noticed is that people always have time to talk to you in the South. It was so surprising to have waiters and waitresses just sit around and actually have a real conversation with you. The second thing I noticed is that southerners are always willing to help you. Angela, the mom of my host family (and herself a triathlete) was always offering to make my stay as “easy-peasy” as possible, which most of the time meant procuring large amounts of food or drink for my high calorie diet. The third thing I noticed is that Southerners don’t mind waiting. While out on the bike, I noticed how polite the drivers were, always waiting until it was absolutely safe before attempting a pass. I felt like I was holding people up so much, sometimes I would purposely swing off to the side of the road and waive drivers on to pass me! You will never see a cyclist/driver interchange like that in Seattle! Birmingham puts bike friendliness on a whole new plane.

So, if you bothered to read this far, you probably want to hear something about the race. Here it is, finally!:

The race consisted of a 10k run, 60k bike, and another 10k run. There were many American professionals, as well as a few from out of the country. Jurie VanSteelant of Belgium was the biggest name, as he has been Pro World Champion in Duathlon, and is pretty well-known for cleaning up in the Powerman race series in Europe.

Run 1: The race started out fast and, as expected, I started out dead last out of the 15 male pros. I worked my way through the field on a difficult, hill-laden run course. Derek Yorek and Josh Merrick took the pace out hot, while Jurie was content to follow. At about the 5k mark, I caught Merrick and Van Steelant, and decided I would settle in at their clip. We finished the first run in 31:50 (blistering considering the nature of the course), with Yorek about 15-20 seconds ahead of us.

Bike: I was excited to see how my new Ceepo Venom would perform, as well as nervous that I had not spent enough time on the new rig, having only built it up about one week prior. Van Steelant had about ten seconds on me by the time I was 200 meters down the road, and I was shocked at how fast both he and Merrick got out of the gate. I took a sharp right hander, and had my eyes set on Merrick, and was nearly run over by a minivan that was traveling in the wrong lane! Yikes, southern drivers are nice, but they sometimes get a bit flustered with what to do with bicyclists traveling at 30 mph on random back roads.
I was “out to dry” in second place for the remainder of the bike portion, knowing their was no chance I could catch Van Steelant, and just hoping to maintain my gap. Going into the last lap of three, I ran out of calories (usually taken in a liquid gel format called “Gu”) and knew that the rest of the ride would be me trying to survive. Going up each hill on the course I was about 2 mph slower over the crest, and knew this was a sign that I was beginning to die.
Coming into the transition area, I noticed last year’s winner, David Thompson, was closing the gap on me. I slipped my feet out of my riding shoes, only to cramp up in both hamstrings going into transition! Ouch! Finally pedaling out the cramps, I tried my usual cyclocross dismount, but having been somewhat disoriented because of the cramping situation, I managed to lose my balance and fell off the bike, leaving a nice chunk of my right knee in Alabama!

Run 2: Being nearly completely out of glycogen in the body, I wasn’t sure if I was even going to make it through the run without hitting the dreaded “bonks” as they call it in cycling or “hitting the wall” as they call it in the marathon. I think in Duathlon they should call it “bonking the wall” but I don’t think it will catch on. Anyhow, I yelled out “Give me the sugar” or some other desperate exclamation at each aid station for sports drink and energy gel to keep me going. Surprisingly, I managed to drop Thompson early on in the run, and was just hoping to maintain my advantage on him and not have to stop and walk any of the hills. Thinking about catching Van Steelant was very unlikely as he put 2.5 minutes on me during the bike. Hitting the turnaround, I could tell no one was going to catch me unless I really blew-up. I survived the last 3 miles, finishing the last 10k around 36:00, over 4 minutes slower than the first run! I don’t think I have ever been so happy to see a finish line in my life, finishing an exhausted but encouraged 2nd place overall, and winning the national championship! Woot Woot!

This race actually got a little press, so to see other articles on the race, here are links:

http://blog.al.com/birmingham-news-sports/2010/03/top-ranked_duathlete_wins_nati.html (this is the best article and even has video of me falling in the transition area).

*Grace is a fundamental principle of Christianity which would make me a thankful recipient of God’s grace. It implies that one is given something without respect to their having earned it. The chief example is God himself taking on humanity in the form of Jesus to take the punishment for humanity’s sins, which if left unreconciled, would have left man in a position of separation from God forever. However, since God did complete this act, man is left in a position of trying to earn their way to God by trying to be as good as him (which is impossible, and frustrating), or by simply letting go of all their pride and thankfully taking the undeserved gift of eternal life, reconciling the individual to God forever. In the spiritual realm, this is done by trusting what someone (Jesus) has already done. The concept of grace can be extended to various practical areas of life and the more one thinks about it, the more he realizes how indispensable a concept it is. At any rate, trying to outdo a southerner’s grace is similar to trying to outdo the grace of God.

back to news
← previous postHow will Sheeks fair in Phoenix? next post →Pain in Placid – Sheeks Ironman Debut