One of the first questions I asked when I joined Team Zoot back in 2015 was, “What is the difference between the Zoot Ultra Tempo 6.0 and the Zoot Ovwa 2.0?”  I was looking for a racing shoe with a moderate amount of stability, and wanted to make the right choice.  At the time, the organizer of the team didn’t know the difference (probably not a pronator, so he had never tried them), and Zoot’s website didn’t seem to spell it out either.  Having wear tested both running shoes for a long time, I thought a Zoot Ultra Tempo 6.0 vs. Zoot Ovwa 2.0 review could provide some input that could make the decision easier on others. 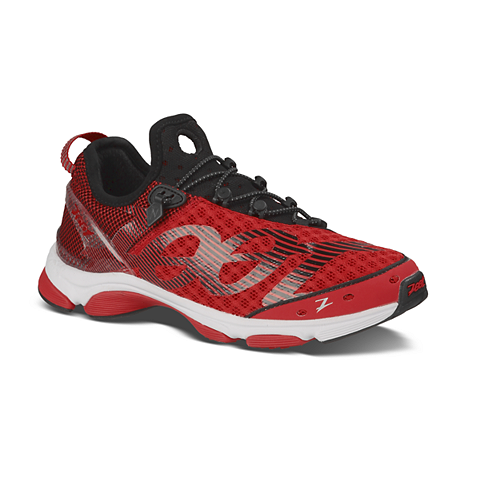 Note:  I got these shoes for free because I was sponsored by Zoot at the time, however, I am not sponsored by them currently nor have any continuing obligation to them (the FTC requires me to disclose this).

Both shoes are billed as stability racers by Zoot, and in Zoot literature, both are claimed to weigh in at 8.5 ounces.  But, these are actually quite different shoes.

The first thing I noticed is that both shoes have a completely different ground feel.  The Ovwa is quite flexible through the sole, while the Ultra Tempo is fairly rigid.  This means the transition is quite nice in the Ovwa, but that doesn’t mean the Zoot Tempo doesn’t perform well.  They seem to have a nice rebound to them, even though the sole is pretty stiff.

The pronation control is also totally different.  I first started running in the Ovwas, and they seemed to underperform in the stability department.  If I’m running in a shoe that doesn’t have enough pronation control, the first thing I’ll notice is some patellar tendonitis coming on in my right knee.  I was always on the verge of redeveloping tendonitis with the Ovwa, but not with the Tempo.  The Tempos had more than enough stability for my pronation.  Even in very long triathlon runs such as the Ironmans, I never had any knee pain with them.

If you’re only a mild pronator, you probably won’t have the same experience as me if you use the Ovwa, but on the same token there are people who pronate worse than I do, and may encounter the same issue.  This is a very individual issue.

I’d say the cushioning does not feel like a lot in the Ultra Tempo, while it feels like plenty in the Ovwa.  I think this is due to the stiffer sole in the Tempo than the Ovwa, and not because of any difference in the actual amount of cushioning.

You’ll also notice that the Ultra Tempo comes with speed laces out of the box, while the Ovwa does not.  The speed laces on the Tempo has a peculiar design however: the laces are held together at the bottom of the lacing pattern with a piece of plastic which is prone to coming undone.  The first thing you should do is remove the plastic piece and tie the laces together at the bottom.  DO NOT do a triathlon without performing this procedure, or you might have your laces come undone in a race!  Bad berries!

I rarely have problems with the uppers of a shoe.  I have a fairly normal shaped foot and don’t need a wide toe box.  Both shoes fit my size 9D feet just fine and run true to size.

The construction on the Ultra Tempo 6.0 is quite sturdy, and I haven’t had any durability problems.  And believe me, I have had them in the past!  The soles of my Avia triathlon racing shoes would come unglued repeatedly back when I was sponsored by them, and I’ve had the uppers blow out on several trainers in the past.  Just by the nature of the Tempos being a racing shoe means the cushioning won’t last forever, but they are extremely well-built in general.  I cannot speak for the Ovwa, because I probably only ran 50-75 miles in them total before switching over to the Tempo.

So which shoe do I actually run in?  I pick the Zoot Tempo every time.  I’ve now run 3 half Ironmans and 4 full Ironmans in the Zoot Tempo, and a slew of other small races.  I’ll also do some tempo runs or cruise intervals in the Tempo.  But my needs are specific.  If you have less issues with pronation, there’s a legitimate case for the Ovwa, but for me it just doesn’t work…damn biomechanics!

It’s tough to get a racing flat for triathlons just right.  Because you’ve got some serious miles under your legs before you get to the run portion of a triathlon, your shoes can’t be quite as light or skimpy as a traditional racing flat, or your calves might just fall off (believe me, I’ve tried!).  For me, the Zoot Ultra Tempo 6.0 is the closest thing I’ve found to triathlon shoe perfection.

I hope you’ve enjoyed my Ultra Tempo 6.0 vs. Zoot Ovwa 2.0 Zoot running shoe review.  Leave me a comment if you have any further questions.  If you found value in this post and would like to buy a pair of Zoot triathlon shoes, use one of the links below which will redirect you to Amazon.