Repent About Repentance #3 – What Does Repent Mean in Greek?

So far in this series we’ve looked at the occurrences where God repents in the Greek Old Testament, and how this is carried over into several English versions.  We’ve also examined how Josephus uses repentance, and how it is often employed in morally negative or morally ambiguous situations that do not result in people reforming their behavior or turning to God. 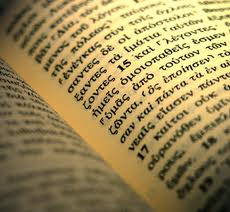 The primary terms we will consider are repent, a translation for the greek verb, μετανοέω, transliterated as metanoeo.  Some of the most recognizable verses where metanoeo is found would be Mark 1:15, Acts 2:38, Acts 3:19, Acts 17:30, Acts 26:20.

So, we will be looking at the definitions for repent and repentance independently, but with the understanding that these are just the verb form and noun form of the same root word, and should have very similar meanings.  Much like how there is a noun and verb form for faith/believe, pistis and pisteou, the same is true of repentance/repent.

My goal in looking at these definitions is not to provide an exhaustive summary of every definition that’s ever been given on metanoeo/metanoia. What I’d like to do is provide are resources that are reputable and can be easily verified.

Here is my selection procedure:

Liddel and Scott: Available online at at http://www.perseus.tufts.edu.  Then look for “Greek and Roman Materials.”  This is a fantastic resource on Greek literature and definitely worthy of a bookmark.

Repent is a compound word formed from “meta”, which means “amid” or “with,” and “noeo,” which means “to exercise the mind.”  Thus, the word literally means, “accompanied by an exercise of the mind,” or “with understanding.”   Any reputable Bible dictionary or Greek-English Lexicon will first define “repent” in this way.

Please note that I have shortened the Vine’s entries due to length.  Please see the full version at Blueletterbible.org.

I would like to highlight Easton’s statement “as the result of after knowledge,” which means that after new information is given or somehow obtained, then someone repents.  This is also evident in Liddel and Scott’s entry, “concur subsequently.” Repentance is often a reaction to new information or a way of thinking.

The noun version, translated as “repentance,” is defined similarly by Bible dictionaries, though more seem to attach the idea of regret to metanoia than they do to metanoeo.  Metanoia comes from the same words “meta” and “noeo,” so we should not be surprised to see virtually identical definitions.

What all this amounts to is that there is good evidence that the primary idea of repentance is a change of mind.  Several of the dictionaries we have looked at make mention that new information or understanding is often involved (Strong’s, Thayer, Easton’s, Liddel & Scott), which leads to the change of mind.  This is why I will typically define the word as: “change of mind based on new information or understanding.” This is universal and applicable to all uses of the word. Some synonyms which may convey the gravity of repentance slightly better would be “rethink, reconsider, or think again.”  I have rarely seen a use of repentance where the change of mind was of little significance.

As I’ve noted before, the term repentance could have special significance when used in a Christian context, so this is one area that we will want to examine once we start looking at New Testament passages.  But, this would have to be something born out by the uses of the word, not an assumption prior to looking at the uses of the word.

I really like the cautions that Marg Mowczko has to say about the usage of Bible dictionaries and lexicons:

“Even if the definitions in these dictionaries approximate the possible meanings of a given Greek word, they usually do not adequately provide a cultural or literary background as to how the word was used by the original speakers and authors. Even a simple, short phrase such as kalon ergon (which is easily translated as “a good deed” or “a fine work”) has a depth of meaning that differs depending on the text and cultural context (e.g. Mark 14:6 cf. 1 Tim 3:1 NIV).

Knowing the definition of a particular Greek word and its grammar is useful, but sometimes it is not enough information to give an understanding of how and why that word (or a phrase) is used in a particular sentence. A dictionary definition does not always give the sense the author intended. It does not alert us to any rhetorical devices being used, devices such as hyperbole or irony. And it may not note the use of idioms. Moreover, information about the etymology of words, which is included in some dictionaries, can mislead people about how the words were used, and what they meant, in real life. An understanding of the Greco-Roman culture, and a knowledge of the literature written around the same the time as when the New Testament was written, are important in helping our understanding of New Testament Greek.”

Next time we will get into some New Testament uses, I promise!

2 comments on “Repent About Repentance #3 – What Does Repent Mean in Greek?”