6 Fitness-Inducing Reasons You Should Own an Elliptigo 8c

The Elliptigo Review that Refused to be Written

Like many high level endurance athletes, I scoffed the first time I saw an Elliptigo. 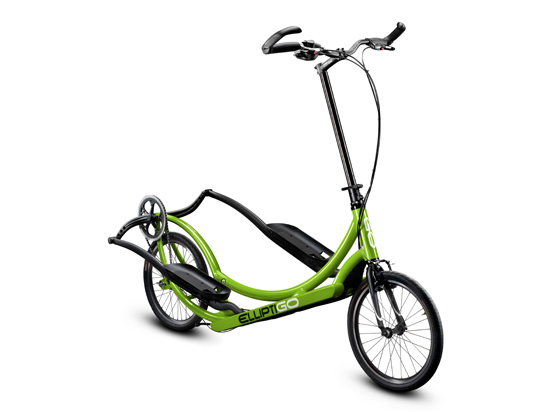 “Why not just ride a bike?”

It always seemed to me that there were better ways to cross-train than an elliptical machine on wheels. Most injured runners can always hop on a road bike, provided they are fairly confident in their handling skills.

Having cycled through many previous injuries during my high school and college days as a runner, this didn’t leave much room for alternate technologies in my mind.

And given my experience with elliptical machines in the past, which often left me feeling like I could never get my heart rate high enough, it was pretty understandable that I would have some degree of skepticism. 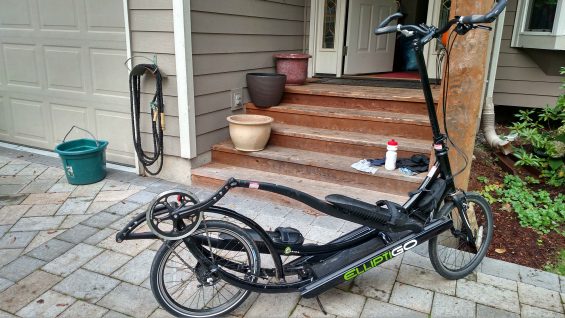 But when I came down with a mysterious back injury this fall and wasn’t able to ride my bike anymore, the elliptical movement became one of the few things I could do.

But I hate the elliptical machine because it’s super boring.

That’s when I realized my friend Mike Sayenko, a former pro marathoner who now runs a top web design firm in Seattle, owned an Elliptigo.

I gave Mike a quick call, and pretty soon I was stuffing his nice Elliptigo 8c into the trunk of my 1998 Ford Contour which I bought for $350, thus proving two things:

(1) You can fit an Elliptigo inside the back of a passenger car,

(2) You can always tell how good an endurance athlete is by the differential of the value of his car versus the value of the gear inside the car.

Now let’s get into the fitness-inducing reasons why the Elliptigo seems to work so well as an alternative fitness builder.  I’m sure you can relate to some of these reasons and hope my experience can help you understand if an Elliptigo bike will be right for you.

Please note that I only write a review like this after testing the product first hand for at least 25 hours.  This ain’t your momma’s  “made for a glossy-magazine review.”  I put in about 50 hours of hard riding on the Elliptigo before ever putting pen to paper.

Reason # 1: You Can Actually Get Your Heart Rate Up on the Elliptigo.

For whatever reason, it appears that while on an elliptical machine it is difficult to produce a sufficient effort level to really challenge the aerobic system, this is not the case when riding outdoors on the Elliptigo 8c.

I attribute this to the difference between indoor and outdoor workouts; the exhilaration of being outdoors, the challenge in constantly changing terrain, and the need to focus on multiple aspects of riding as opposed to mainly focusing on the pain means you’re just able to go harder on the Elliptigo.

I’ve noticed this to be true of indoor riding on a stationary trainer versus outdoor riding as well.

There could be a mechanical reason why the Elliptigo induces a better workout.  The stride-length on the Elliptigo 8c does seem longer than a conventional elliptical bike, and I speculate this might have something to do with it as well.

Reason #2:  You Can Go Long on the Elliptigo

Because the Elliptigo is not incredibly boring like a traditional ellitpical machine,  you can go long on it without feeling like you want to put a bullet in your head.

One of the next rides I did was a massive, although gradual, climb from 3000 to 6000 feet along the Grande Ronde River.  This was a really challenging ride and definitely put me in the pain cave.  The climb is always a ball-buster because it gets steeper and steeper as you continue on, meaning you have to go the hardest when you’re the most fatigued – plus you’re starting to get to a decent elevation at the same time.

At the time, I thought this ride must have been some sort of monumental achievement for Elliptigo riders.  All I had ever seen were Freds (cyclist slang for slow fat guys) riding Elliptigos on a pancake-flat bike path back in my hometown of Woodinville, WA.  But after doing some research I found a guy that does 1000km rides on an Elliptigo.  Now that is just phenomenal!

There are some advantages and disadvantages to going long on the Elliptigo.  One is that you’re in a more upright and natural position on the Elliptigo.  For me this is a big advantage because my back isn’t stuck in flexion the whole time, as it is on my road or tri bike.  But you’re also having to hold yourself up on the Elliptigo with your arms the whole time.  So if you’re also a swimmer like me, you might end up with some arms that are about as tired as your legs after a really long session, but on shorter rides it’s not really noticeable.

Reason #3:  You Can Go Hard on the Elliptigo

This is a concern closely related to getting my heart rate up.  I was initially worried that I just wouldn’t get the leverage to really push the power into the Elliptigo, but this turns out to not be true.  Going up a steep climb, the movement actually feels very similar to climbing out of the saddle on a bicycle, which we all know is very hard and allows you to put a lot of power into the bike.

You can also do sprints or intervals on an Elliptigo bike.  My favorite course for Elliptigo riding would be one with fairly sharp rollers that you really have to hammer to get up, possibly 30 second to 1 minute sections, with longer gradual sections where you can cruise more comfortably.

The Elliptigo 8c is reasonably well-geared.  I can get up to about 26-27 mph before spinning out and choosing to coast.  I can also go as slow as about 6 mph without feeling vastly overgeared.  This means I can climb up to about a 15% grade, but it’s going to take some serious effort.

I’ve also learned how to do a tuck on the Elliptigo 8c (essentially kneeling down in order to reduce drag), but I wouldn’t recommend trying this unless you have  some serious balance skills.

If you have the cash, upgrading to the Elliptigo 11r would be a wise move if you plan to put the Elliptigo through heavy use on a variety of terrain.

Reason #5: The Elliptigo is an Enticing Commute Alternative

I found out early on just how convenient it is to commute on the Elliptigo, and quickly began to prefer the Elliptigo 8c to driving in a car.   Most of my commutes were about 1 mile. I can travel at about walking effort-level on the Elliptigo, so I’m not even breaking a sweat but I still feel like I’m getting somewhere.  I’m probably averaging about 10 miles/hr when I commute and can roll right up to my destination, pop the kick stand, and lock the Elliptigo.  So for a commute this short, it definitely makes sense.

Compared to cycling, you don’t have to worry about sitting on a bike seat or getting your pants caught in the gears, which is another bonus. In addition, I noticed that in rainy weather there is virtually no road spray, so you can commute in the rain without having to worry about your pants getting wet or needing to install fenders.

You can almost think of the Elliptigo like being on a pedal-powered Segway. 🙂

Reason #6: The Elliptigo is Portable

The front end of the Elliptigo 8c does seem a bit massive, but the engineers at Elliptigo have made it quite easy to break it down using quick-release levers; this allows you to reduce the height of the Elliptgo and pop it into a car.  You don’t really need a special bike rack if you can get a little creative.

Because I was able to get the Elliptigo 8c into sedans and SUVs alike, this made it easy to transport it to different riding destinations.  I enjoy the trick of riding the Elliptigo to start a hike with my girlfriend, for instance.  It takes about 3 minutes to break down the Elliptigo, pop it into a car, and off we go.

Here’s another ride I did after some epic target shooting.  It’s nice to be able to combine riding with other activities :).

Everything about the Elliptigo isn’t all peaches and cream, however.  Here are all the potential cons I found while using the Elliptigo:

I’m really impressed with the Elliptigo 8c and the variety of applications it offers.  It’s way better at improving my fitness than I expected, and clearly has some nice side benefits as well. I’d be interested to check out the other models in the Elliptigo line to see if the 8c can be improved upon, but so far have not had a chance to do so.

If you found value in this post and you’re interested in purchasing an Elliptigo you can do so using one of the Amazon links below.

Thanks for reading and please comment if you have any further questions.

Until we ride again,

elliptigo
Tuesday, January 10, 2017
★★★★★
“ Like many high level endurance athletes, I scoffed at the first time I saw an Elliptigo. But now that I've ridden one for several months, I'm really impressed with the Elliptigo 8c and the variety of applications it offers. It’s way better at improving my fitness than I expected, and clearly has some nice side benefits (i.e. commuting) as well.”
- Matthew Sheeks