There are a lot of Kestrel 4000 bike reviews out there, so what makes this one different?

The main difference is that I have actually field tested the Kestrel 4000 bike extensively as a pro triathlete.  As of this article, I have been using the Kestrel 4000 Pro SL as my primary triathlon rig for 10 months now, and I intend to keep using it and testing it.

There have also been many comparisons drawn between the Kestrel Airfoil Pro SL and the Kestrel 4000 Pro SL.  Having owned the Kestrel Airfoil and ridden it extensively for five years, racing it in the professional field in some of the most difficult Ironmans in the world, I thought I would weigh in and provide some additional value to what has already been written.  Bike magazine editors simply don’t have the same level of acquaintance with these products that I do. 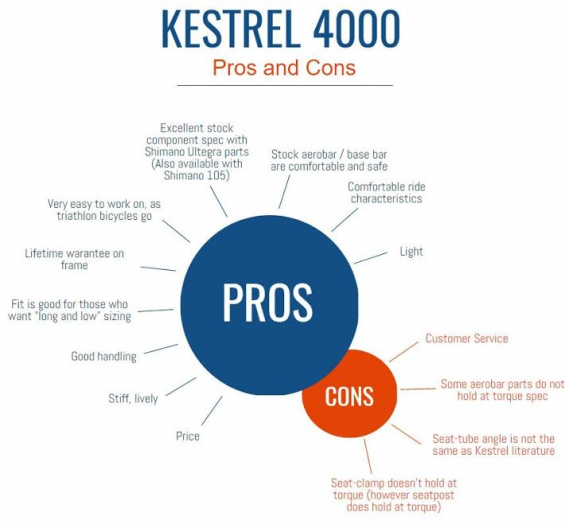 Before we get into the meat and potatoes of review, I wanted to provide an opportunity to buy the Kestrel 4000 through these Amazon Affiliate links.  This will help out my cause in providing in-depth product reviews with extensive product testing behind them, and it doesn’t cost you anything extra.

Although I am a little nit-picky about some of less important issues regarding the Kestrel 4000, it really is a nice little machine.  Even if you don’t see exactly what you’re looking for, just click on the link and you will likely be able to find your size by browsing

– Very easy to work on, as triathlon bicycles go.

– Fit is good for those who want “long and low” sizing

– Some aerobar parts do not hold at torque spec

– Seat angle specs do not match Airfoil as described by Kestrel

One nice feature of the Kestrel Bicycles line is that it will accommodate the “long and low” time trial or triathlon position.  That is, their bicycles have fairly long top tubes, and fairly short head tubes.  This is important for riders such as myself who have short legs and a long torso.  On many manufacturer’s triathlon bikes, I simply cannot get into a position low enough to even be considered reasonably aerodynamic.  In short, the trend has been towards shorter top tubes and taller head tubes.  Case in point, on a 54cm Specialized Shiv I run a 13cm stem with a -25 degree decline.

However, there is a big issue with Kestrel’s sizing charts.  As you can see in their Kestrel 4000 sizing chart and Kestrel Airfoil Sizing Chart, the seat-tube angle for the 4000 should be virtually the same as the Airfoil, when in the forward position.  However, to get even close to the right position on the 4000, I had to slam the saddle all the way forward.  The Kestrel 4000 comes with a seatpost where one can adjust the saddle clamp a good 4 inches one way or the other, and I was running the clamp at the very front end, and then slamming the saddle all the way forward on the rails, and it still wasn’t far forward enough. 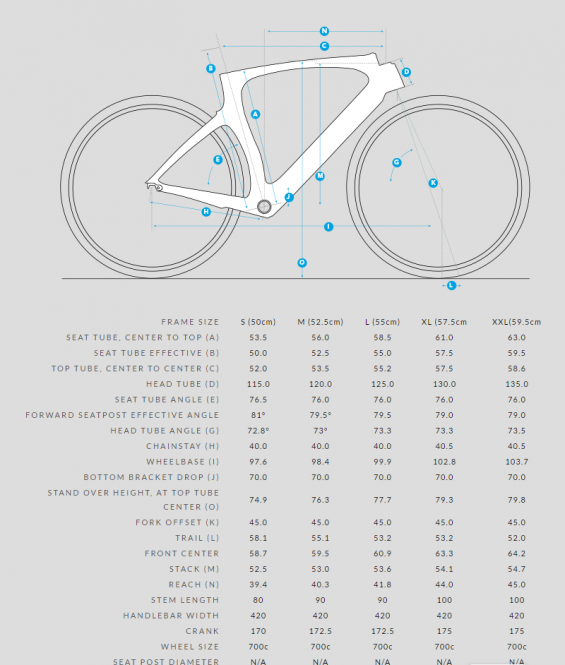 Takeaway: if you need to run the saddle very far forward, this might not be the bike for you.

With the saddle so far forward, this created an interesting leverage point.  The issue may have occurred anyway, but the saddle clamp simply would not hold at its stated torque-spec (12nm), and the saddle kept slipping down.  This is a bad situation to be in as a rider, because you don’t want a saddle slipping down in a ride, much less a race, and this situation can very easily ruin either.  Obviously you want your saddle to stay where you mean it to stay, so that you’re riding in the same position the whole time.  As you can see in the video (below), the new saddle clamp for the 4000 is slightly different from the old saddle clamp from the Airfoil (both manufactured by Ritchey).  My solution was to steal the old saddle clamp off of my Airfoil, which happened to work on the new seatpost.  This solution finally worked and I was able to get the saddle to stop slipping.

Takeaway: If you decide to order a 4000, make sure you order it soon enough to have plenty of time to solve any sizing issues.

Sizing and positioning issues aside, the Kestrel 4000 Ultegra does perform incredibly well.  The frame is laterally stiff, yet lively.  It’s also much lighter than my Shiv, even with stock components.

On my Shiv, I noticed it had a “dead” feeling which seemed to absorb a lot of my power, and on descents I felt like I was getting bucked off the front end of the bike when I would hit little bumps or imperfections in the road. The Kestrel 4000 handles really well in corners and descents, and definitely feels like more of my power is going to forward motion.  Overall, those are some dramatic differences between the Shiv and the Kestrel.

I can’t speak directly to the aerodynamic properties of the bike.  I would imagine it’s not as aero as the Shiv just by looking at it.  If you were only looking at pictures and comparing the Kestrel 4000 to the Kestrel Airfoil, you’d think the Airfoil would win simply because it lacks a seat-tube.  However, when you get up close and personal with both frames, you’ll realize this is not the case.  The Kestrel 4000 has a much thinner downtube, which is certainly more aerodynamic, and it also comes with an updated fork that is also clearly more aerodynamic.  Although the design of the head-tubes appears similar, the 4000’s is narrower and thus likely to be more aero.  Given that I bought this bike specifically for Ironman Wales, where the average speeds are very slow, it made little difference which bike was slightly more aero than another.  For me, I knew I’d gain 10-15 seconds on every corner I could rail, and on every little climb I didn’t have to overexert myself, and this is where the time advantages would come from.

For being stock aerobars and for the price, the Oval 750 base bar and aerobars are really nice.  They are a full carbon aerobar (though not a one-piece bar, which can be both an advantage and a disadvantage ), and I feel like they put my hands in exactly right position.  I can’t understand why other riders put up with straight or S-bend bars, which seem to put extra stress on your wrists, and don’t feel as safe on descents.  The Oval 750 base bar has an upward curve towards the end of the base bar, which helps prevent your hands from slipping forward on the bar, an especially nice feature on descents.  The same thing goes for the Oval 750 aerobar – the J-bend design really locks you in – super comfortable and super safe.

There is one big downside with the Oval 750 though, and we’re back to our old problem: some of the parts don’t hold at torque spec!  It looks like on some areas of this bar a gritty texture has been added where certain parts attach to others, but this doesn’t seem to fix the problem.  Even with adding some carbon grip (a sort of gritty goop that is made specifically to fix this problem), I still have to really over-tighten the parts on the bar to get them to hold, otherwise I’ll hit a bump and all of a sudden my aerobar pad has rotated downward from where it should be.

Takeaway: Aerobars are very comfortable but are going to take some English to get them to stay put.

Easy to Work On

As far as tri-bikes go, the Kestrel 4000 Pro SL does seem incredibly easy to work with/work on.  With a standard 1 1/8 inch steerer-tube that accepts standard stems, you can swap out stems and bars as much as you want, meaning you have thousands of stem/bar combinations that you could choose from, if you so desired.  Many bike companies these days create a proprietary stem/bar combo, and you are stuck with their bar as long as you have their bike.  This might give you nominal performance gains in aerodynamics, but it sure is a pain!

The 4000 does hide the rear brake underneath the bottom bracket, making it less accessible.  This makes it more difficult to work on than a standard road bike, or say, the Kestrel Airfoil, which had the rear brake in the standard position.  But, on the plus side, the Kestrel 4000 comes stock with barrel adjusters for the brakes and derailleurs, meaning you can make micro adjustments on the fly from up on the cable housing where they exit the bar.  This makes quick adjustments a snap.  I also really like the quick release mechanism on the TRP brakes, making it really easy to release the brakes completely to slide out the wheel.

Takeaway:  Overall, for triathlon bikes, this is one of the easiest bikes in production to work on.

This is a great bike for the money.  If you can solve the initial problems with sizing and hack the torque settings like I did, it could be one of the best buys on the market.  This is probably a good purchase for everyday time trialing and amateur triathletes, and especially so for those that are on a tight budget and work on their own bike.  Elite athletes will want to upgrade some of the parts on the bike (or simply purchase one of the higher end Kestrel 4000s available), or may want to look at other brands.

If you’ve found value in this post and want to buy a Kestrel 4000 Pro SL, you can do so through me as I am a member of Amazon Affiliates.  I do receive a commission for this, and would appreciate the click-thru if you have received value from this post.  Just click on one of the following links and you’ll be redirected to Amazon.  Even if this post convinced you not to buy a Kestrel, you can still use the below links to get to Amazon, then browse and buy whatever you want, and it will still help me out.

Until we ride again,

It seems as though Kestrel likes to list one bicycle at a time, so you may find using this link easier to browse the various models available.

Kestrel 4000
Monday, April 24, 2017
★★★★☆
“ Nice value for a well performing triathlon bike. Some issues with the parts spec, particularly the base bar/aerobar. Try to avoid having to deal with Kestrel customer service.”
- Matthew Sheeks