You’re probably aware that Christians everywhere recently celebrated Christ’s coming to earth.  But did you know that there are actually two competing views within Christianity as to why Jesus even came?  One essentially says that Christ came to make demands on us, the other that Christ came to free us from demands that already existed.  One is that He came to ask you to DO something, the other is that He DID something for you.

One verse I really like that expresses the correct concept is John 3:17 – “For God did not send the Son into the world to judge the world, but that the world might be saved through Him.”

Systematically, one theory is known as works and the other grace.  The works concept, actually much more popular amongst churchgoers, is very similar to other world religions, while the grace concept is completely novel.  The works concept says that man must earn their way to God by being a good person, while the grace concept says the way to God is an undeserved gift provided by God Himself.  The works concept is very similar to what we experience in many facets of life such as business relationships, or school.  If you work hard, do well, and achieve excellence, you get a good grade, a job, a raise, etc. Those who ascribe to the “works” concept assume that since so much of life is merit-based, why would one’s moral and spiritual performance not be the determining factor to get to God?  On the other hand, in the grace concept, God is viewed more in relational terms.  He is like a Father that loves you unconditionally, and nothing you can do as a child of God can affect your standing with Him. 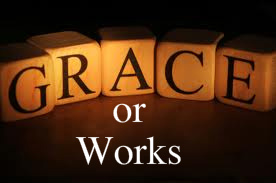 If you have a church background, which one would you say your church taught?

The “works” concept generally says that what Jesus did for mankind, with His coming to earth and death for our sins, was necessary but not enough for man to be able to make it to God’s level; to some extent man must also do their part to make it to heaven, eternal life, righteousness, etc.  The “grace” concept says that what Jesus did for us was “enough” – final, complete, finito!  As our sins have already been paid for and salvation has already been secured, God can credit His righteousness to anyone who would rely on Him for it. So we do have a role to fulfill, but it as a passive role to accept what Christ has done on our behalf.

I have a quick analogy I call “the dishwashing analogy” that illustrates the concept well.  It is as though you are responsible for cleaning the dishes, yet the amount of dishes to clean is so great that as you continue to load the dishwasher, you get hungry, have to eat, and create more dirty dishes.  In fact, for arguments sake let’s say that the rate at which you create dirty dishes is greater than the rate at which you are able to load them.  You admit that it is your responsibility to clean the dishes, yet you have no ability in yourself to ever complete the job.  Dismayed, you finally give up.  Hours later, your brother comes to you and says, “I have good news for you – though you were unable to complete your responsibility of loading the dishwasher, someone with superior skill has come into the house and has done the dishes for you.”

If you are in this position, you actually have a couple options, though only one is reasonable.  You could continue trying to clean the dishes, which would be extremely foolish, both because they are already clean, and because all you ever succeeded at was creating more dirty dishes.  The other option is that you could rely on the work of another.  This is what it means to trust in Christ.  You rely on the work of another.

I will leave it to the Bible to drive the point home: “Now to the one who works, wages are not credited as a gift, but as an obligation.  However, the one who does not work but trusts God who justifies the ungodly, their faith is credited as righteousness.” (Romans 4:4-5)